Sylvie is the Guildmaster of the Adventurer's Guild in Faltra City.

Being a Grasswalker, she has a petite frame with rabbit ears and tail. She has short red hair. She wears an outfit that is mostly a thin layer of cloth that exposes her belly button with some ornaments.

She wants Diablo and Shera to get together, and even dressed up Shera in very revealing clothes to make Diablo "energetic." Her duty as the leader of the Adventurer's guild forces her to demand Krebskrum be put down after the rampage triggered by Saddler's acts. She doesn't like it, but the safety of the six races is her top priority. Fortunately, Diablo finds another way.

Long ago, she met a witch who claimed to be a person who is disconnected from the world's logic. She received a pouch from the witch and the items in it.

She called Diablo to her room after the magic power measurement test. Impressed by the power of Diablo, she delivers a request from the guild of the mages to be Diablo's first mission, which turned out to be a Galluk trap.

After meeting with Diablo, she learns from him that the pair of 《Marriage Rings》 that Rem and Shera have are paired with each other and that Rem and Shera are technically married to each other. In order to help Diablo prevent the two from finding out this fact, she travels to the dungeon 《Dark Green Cathedral》 where they hope to obtain a key ingredient to make new 《Marriage Rings》 known as 《Eternal Mythril》, which can only be collected when a male-female pair go into dungeon. While going to the capital with Diablo. She tells Diablo that Emile is in charge of the Faltra guild. It is hinted at that she would leave as headmaster. If Diablo would agree to let her join the group. After Europa begins to attack the magic academy. She returns with Lumachina to end its rampage.

She is a Grasswalker. By nature, she excels in Hide skills and AGI. She'd move so as not to be discovered, and could nimbly avoid the enemy even if she is discovered.

She is a Sorcerer that specializes in Support Magic. Although she had a cover of having a light defense, she would fire off bad status magic. She specializes in using plant-based spells. 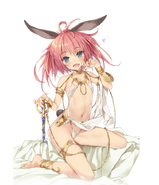 Retrieved from "https://isekai-maou.fandom.com/wiki/Sylvie?oldid=7800"
Community content is available under CC-BY-SA unless otherwise noted.