Lumachina Weselia is the High priest of the church of the divine beings, she is introduced being hunted down by Paladin Gewalt for assassination because she dared investigate complaints of fraud, corruption, and other unpleasantness from the Church Of Divine Beings.

She is an extremely beautiful girl. She has transparent-like platinum blonde hair and hazel eyes. Her skin is smooth enough to seem like even the skin of the elves could compare and her physique has an exquisite balance between mature beauty and an innocent cuteness.

She wears a loose robe silk dress with red and white as the basic tones with high heels and a hat with the symbol of her faith on it. The long cloth of the robes covered things down to the knees. However, gaps in the robe dress allow some of her wholesome skin to be seen. She has long white hair to highlight her very high magical power.

She is a deeply religious person. She believes in, has faith in, and worships the God of her faith. She is so religious that she believes "if she prays, Kami-sama should come and save her".

She is innocent, naïve, and straightforward. Enough so that she is under the impression that "if the person that saw her naked was a person of the Races, then she needed to marry them".

She was raised to believe that the only man she should ever reveal her body to is her marriage partner, with the sole exception of "Kami-sama" who is a supernatural divine being that's been watching over her since she was born.

In direct response to her prayers, Diablo, who was testing "Flight" magic at the time goes to investigate. By sheer coincidence, his spell runs out, causing him to crash right on top of the monster threatening her, and since his aura is both the most powerful and most pure she's ever seen, she confuses him with "Kami-sama" whom she was specifically praying to. As he was preparing to kill her, Holy Knight Gewalt summoned a "Beast Mushroom" monster that ripped of her clothes while he laughed at her distress and relished humiliating her by saying she'd be good as a whore, mocking her cries of desperation.

Because she was afflicted by a curse, she travels with Diablo's group to a Dungeon to retrieve an item to cure her curse.

Lumachina appears in the volume.

She possesses a tremendous amount of magical power. Enough that it shows itself as a pillar of light to those who can see magical energy. When Diablo compares the magical power to his own, he describes her magical power as being many times larger than his own.

However, her powers seem to only activate when she is praying, reciting scripture, or in times of great distress. She seems to only have access to healing and recovery miracles at the moment. Her magical powers are incredibly strong, able to cure the gravest of wounds and curses with astonishing ease, but in exchange, healing magic doesn't work on her at all. The only method by which she can be healed is by the use of potions.

A female Paladin who tried to help Lumachina.

A Paladin that was sent to assassinate her. After she saved him from his mortal wounds, he quit as a Paladin and gave up trying to kill her.

Lumachina believes that he is God due to him suddenly appearing when she prayed to God to help her. Later she would abandon this idea coming to respect and admire him as an adventurer.

When she meets Krebskulm, they immediately hate each other, due to their polar opposite origins. Krebskulm hates the gods she worships, for good reason, and she is repulsed by Krebskulm's Demon Lord aura. 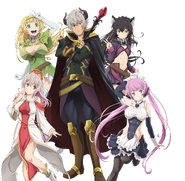 Retrieved from "https://isekai-maou.fandom.com/wiki/Lumachina_Weselia?oldid=7794"
Community content is available under CC-BY-SA unless otherwise noted.