The "Demon King’s Labyrinth" is the Dungeon created by Diablo in Cross Reverie.

As well as the 《Avatar Diablo》 it was made in Cross Reverie, becoming real while being summoned to the "Other world".

In the MMORPG Cross Reverie, there was a system called the《Warehouse》. Since it wasn’t something that was handheld, it couldn’t be used immediately at one’s destination, but it was possible to retain an enormous amount of items with it. A countless number of super-rare items whose acquisition method were unknown, were stored within Diablo’s 《Warehouse》.

In Cross Reverie, a peculiar plot of land would be granted to Players that raised military gains that went over a fixed amount. Diablo constructed that peculiar space into a Demon King-like dungeon. Its location was in the western direction, and was close to Zircon Tower city in the Demon King territory.

Within the desert, that building existed as if it were added after the fact. On the triangular structure that looked like a pyramid, a stone door was attached. What protected the door was a lion statue, it possessed the wings of an eagle, and its tail was a snake, it was a so-called chimera. It used Petrification Breath and lightning magic.

When all of the monsters on this floor are defeated, a staircase will appear in the back. On the first underground floor, only the monsters’ levels were low, but it had become a searching around quest to find out where in the complex maze the monsters were. Since the location of the monsters were random. Some would be camouflaged into the ground and walls, while there were some that stuck onto the ceiling and fell on top of Players that were passing by.

Diablo and his group break into the first floor

"Transforming Maze" this place is a maze that changes with the passage of time. Monsters also wander about. While worrying about where to go, the wall at the back would open up and monsters would appear. 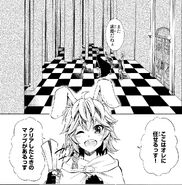 The third floor’s mechanism was a homage to a certain retro game, it was made so that when Slimes of differing color were defeated in order, the staircase going down would appear. 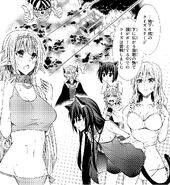 Gondola over a volcano

Place freezing with cold wind and falling snow all the time, 30《White Jägers》level 93 guard that floor, challengers must defeat the monsters or win a dance challenge.

Idol's in spectacle for 《White Jägers》

It was a stage that looked like they were in a forest where vegetation grew rampant. There was even a gently flowing river, 《Grand Cancer》was level 99 guard that floor, it was a top-class monster in terms of sturdiness. Its gigantic pincers could bisect even a knight’s armor. Its movement by means of its eight legs was surprisingly fast, and it possessed a bubble breath that had a poison effect. It was an aquatic monster, but it was stronger when on land. Challengers must defeat him or win a cooking challenge

There is a great river, there is a thin path that runs along a cliff. Flying monsters should come attacking. At the end of that floor, a large mid-boss level monster is there, but it doesn’t have a Debuff Resistance.

Has a moving floor as the mechanism. When stepped on carelessly, it will lead you to a room where a large quantity of monsters awaits. When a mistake was made in the moving floor route selection, they would be dropped into a monster house where there was a large amount of 《Ant Beetle》 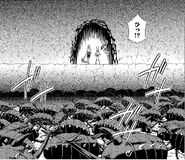 It is a graveyard where《Death Dancer》《Ghost》《zombies》 and other living dead monsters attack.

There is a warning on the door that says "Those who value their lives should leave", this floor it was a vast, spacious cave. The ceiling couldn’t be compared with the other floors, and continued on endlessly. What could faintly be seen was sky. The《Large Black Dragon》level 140 guard that floor, its personality was 《Super Aggressive》, Black Dragons use Acid Breath, its Debuff resistance is high, and it has a barrier that negates damage under a fixed amount.

The Demon King’s Room, on the wall that was grotesquely designed to imitate internal organs, there were skeletal candle stands, and white bone colored candles that were lit. Rose was parked on this floor, she acts as guardian of Diablo's treasures.

Beyond the door that was back behind the throne, there was a vast space that seemed like it was infinite. It seemed that it was either similar to the pouch that Diablo possessed and was magically connected to a different place, or maybe the space itself was created with magic. Countless stone pedestals were lined up. Enough to think that they continued on forever. Various articles were placed on top of the pedestals.

Diablo and a challenger

Retrieved from "https://isekai-maou.fandom.com/wiki/Demon_King’s_Labyrinth?oldid=6648"
Community content is available under CC-BY-SA unless otherwise noted.